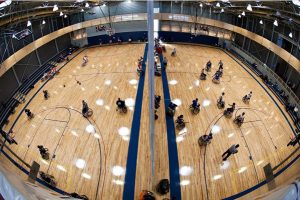 The Virginia G. Piper Sports and Fitness Center (currently called “Ability360 Sports & Fitness Center) is a fitness center with wheelchair-accessible weight machines, an aquatic area equipped with lifts and elevators, accessible locker rooms, and more! Their mission is to provide exceptional adaptive sports, recreation, aquatic and fitness programs that promote the independence, health and overall well-being of people who acquired their disability from birth, during a war, involvement in an accident or as the victim of a senseless act of violence. Jennifer Longdon is one of those people. The Virginia G. Piper Sports and Fitness Center for Persons with Disabilities (SpoFit) is a 45,000-square-foot, state-of-the-art facility located at 5031 East Washington Street, Phoenix, Arizona. To learn about the legacy of Virginia Galvin Piper, founder, click here.

“I first learned about the fitness center when I attended Catherine Anaya’s “Sisterhood of Super Women” luncheon. I am a member of LA Fitness, and this center made LA Fitness look dated and out of touch with “real needs”! Our tour guide was Jennifer Longdon, spokesperson for the center. At the time, I was just finishing up a chapter on “Accommodating Guests with Disabilities” for my recently released book, “The Art of Professional Connections: Event Strategies for Successful Business Entertaining.” I was proud of what I had written and asked Jennifer if she would serve as a fact-checker to make sure that it was written correctly. Her immediate response was that she was preparing for a meeting with former president Clinton and her time was limited; however, she agreed to receive the manuscript section. I will never forget her response: “Gloria, I have met you and I know that you mean well … however …” I knew the piece was in trouble! So I asked Jennifer to rewrite it. It now stands as Jennifer Longdon’s chapter on page 159, and is a must-read for anyone planning an event who wants to demonstrate that they cover “all” details!”

A personal glimpse into the life of
Jennifer Longdon:
Building a New Life after a Tragedy

“In one instant I was just like you; in the next I was a person with a disability, and the way the world interacted with me was forever changed.

On November 15, 2004, while riding along holding my fiancé’s hand, making wedding plans, our vehicle was sideswiped and targeted by five random bullets. My fiancé was shot three times. His most devastating injury was a head wound that severed his olfactory and optic nerves, causing a complete loss of his senses of smell and sight and significant cognitive injuries. I was shot in the back and paralyzed from the middle of my chest down. As a result of my spinal cord injury, I am now a full-time wheelchair user and also face some significant physical challenges. Our shooter has never been found.

That night my heart stopped beating for a time and was restarted. Hence, I was “reborn” in a very literal sense. Holding onto that analogy has been essential as I’ve worked to build a new life.

The physical recovery period following my injury was a time of deep reflection on who I was prior to injury, who I am now and who I still wanted to be. I’ve accomplished much in the intervening years since my shooting, but there’s much more to do. As a result of my experience, I have a dual mission: to work to create more community inclusion for people with disabilities and to curb gun violence through education and sensible gun reform. This mission gives me purpose and sometimes even pays the bills. I’ve found athletic outlets and completed a few half-marathons, using those endurance runs to raise money for spinal cord injury research. I live independently in my own home, where I love to cook and entertain. I have found new habits and rhythms that once again fill my days and create meaning.

The lynchpin to finding self-fulfillment post-injury was finding a way to appreciate my body again. The SpoFit has been an important part of that quest. The work I do in this facility reminds me to focus on my ability rather than on my disability. Here I’m neither an object of “inspiration” nor of pity. I’m just another gym rat.

Everyone and everybody is welcomed at SpoFit. Here, I can push my limits, set new goals, test my mettle and compete with friends while building a sense of camaraderie through physical endurance, and I can leave victorious. Study upon study indicates that physical activity is a key component to health, both physical and mental.

is designed to be universally accessible; every individual can find some activity in which he or she can participate, from wheelchair rugby and fencing to dance and martial arts classes, yoga, cardio, swimming, team sports and personal triumphs of besting one’s own physical limits. SpoFit is a tribute to victory, not limitations.”

Jennifer Longdon is a public speaker, writer and trainer on disability issues and gun violence prevention. She is immediate past chair of the Phoenix Mayor’s Commission on Disability Issues, a member of the Arizona Statewide Independent Living Council and public impact advisor to the Christopher and Dana Reeve Foundation. She volunteers as a peer mentor for people with disabilities through a variety of organizations.

You can learn more about Jen and the public perceptions of disability by watching her Ignite performance here.