The world lost an amazing role model and etiquette and protocol advisor, Letitia Baldrige, in November, 2012, Her 86 years included serving as social secretary to the first lady, Jacqueline Kennedy, in the early 1960s. Following her years with the Kennedy administration, she started her own public relations and marketing firm. In 1978 she updated The Amy Vanderbilt Complete Book of Etiquette. She then took those experiences and translated them into a syndicated column advising readers on good manners in contemporary America and authored her famous series of Complete Guide to … books. These books, which have served many generations, became the ultimate guides for those of us entering the etiquette and protocol industry.

My Personal Journey with “Tish” 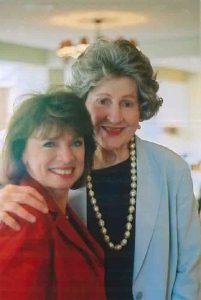 In July, 2000, I was going to be in Washington DC attending an NSA (National Speakers Association) convention. So I decided, why not take advantage of this opportunity and meet the woman who wrote the series of books that provided so many of us entering the etiquette/protocol industry the foundation for our knowledge? I had subscribed to her newsletter, and one of these newsletters included her “aol” email address. Now, I truly had my opportunity. It would be easy to send her an email, but what could I put in the subject line that would get her attention? Then I thought: “colleague,” and I extended an invitation to have her join me for lunch at the Four Seasons Restaurant. (I did my “power lunch” research and learned that she had a special table at the Four Seasons Hotel in Washington.)

She finally responded to the email simply stating that she had never heard of me, and how is it that I could refer to myself as her colleague? Yes, she agreed that the subject line did get her attention. However, she stated that she was extremely busy and did not feel a meeting was possible. So I asked if I could call her when I arrived to see if her schedule had changed. She said, “If you must,” and gave me her office phone number. If you have ever watched water boil, that is the feeling that I had that Monday morning as I watched the clock go from 8:00 to 8:10 a.m. (I did not want to appear too anxious.) I called at 8:10 and secured the luncheon date.

I sat with very proper posture in the lobby of the Four Seasons, wearing a tailored suit and my hair perfectly styled, as I awaited her arrival. When her chauffeur opened her car door, a very tall woman walking with a cane and wearing a beautiful floral silk blouse with slacks entered the lobby. Upon spotting me, she said, “You must be Ms. Petersen,” and smiled. (You could not miss me!) I will never forget that moment. Later, she told me that it was my persistence and positive approach that granted me not only the lunch, but what became a longtime friendship. Furthermore, when seeking advice, I never asked for the answer; I offered what I thought was correct and allowed her to concur or correct me. At one point she commented that it was obvious that I was not going to go away, and that her friends call her “Tish.” I was now officially a new friend.

On July 29, 2004, the following GPA (Global Protocol Academy) graduates were able to participate in our luncheon: Dr. Suh, Myung Sun-Joy, Tamna University, South Korea; Michele Ivey, Harrisonburg, Virginia; and Stephanie Malveaux, San Marcos, California. They were all mesmerized by this amazing role model. Unfortunately, her health issues did not allow any more luncheons with my team of experts.

Tish and I stayed in touch, and in the spring of 2012 she graciously agreed to endorse my third book, The Art of Professional Connections: Dining Strategies for Building and Sustaining Business Relationships. It was the last book that she was able to endorse. I am so proud that I had the opportunity to know her and to reach out to her. Her legacy lives on through her work and her books.

The Letitia Baldrige Library of Knowledge: